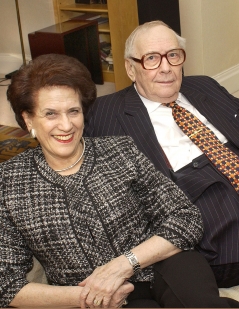 Victor and Lilian Hochhauser have both been closely associated with Russian artists for over fifty years and their influence on the cultural life of Britain has been considerable.

Not only have they regularly brought the Bolshoi and Mariinsky (formerly Kirov) opera and ballet companies to London since the early 60s, they have also promoted a galaxy of musicians including the Borodin Quartet, Emil Gilels, David and Igor Oistrakh, Sviatoslav Richter, Mstislav Rostropovich and Galina Vishnevskaya and all the leading Russian orchestras, as well as composers such as Dmitri Kabalevsky, Aram Khachaturian, Dmitri Shostakovich and Moise Weinberg.

...as well as several famous Russian orchestras including

They arranged the first UK performances of the following pieces, composed by Dmitri Shostakovich:

In 1972, they organised 32 concerts across the country in a Festival of Russian Music and Musicians, with Dmitri Shostakovich as guest of honour.

Victor and Lilian Hochhauser also introduced to the UK many spectacular ethnic dance companies, including

In 1961 they brought the Kirov Ballet to the Royal Opera House for its first tour to the West, followed by the Bolshoi Ballet in 1963. Since then, these two magnificent companies have been regular UK visitors. Since 1991, they have arranged more than 1,500 performances of Moscow City Ballet in theatres all over the British Isles.

In 2011, Lilian and Victor Hochhauser presented the Mariinsky Ballet at the Royal Opera House and a second tour of the extraordinary Guangdong Acrobatic Troupe of China, performing Swan Lake at the London Coliseum and in the provinces. They also arranged for the Israel Philharmonic Orchestra to appear at the BBC Proms. The IPO's resident conductor Zubin Mehta was joined by soloist Gil Shaham.  Sir Peter Wright's The Nutcracker ended a very busy year!

More hugely successful ballet seasons followed, all at the Royal Opera House. 2013 and 2016 saw the return of the brilliant Bolshoi Ballet and in 2014 and 2017 it was the turn of the magnificent Mariinsky Ballet. The Bolshoi Ballet thrilled us yet again with their sparkling repertoire in 2019. Regretfully, the 2020 season featuring the National Ballet of Canada's performances of Rudolf Nureyev's The Sleeping Beauty had to be cancelled due to the Covid-19 pandemic.